Glyphosate (Roundup) seems to be everywhere. It occurs in nearly everything that you eat and drink. Even products labeled “organic” can contain it. If you really want to reduce your exposure to glyphosate toxicity, which is a great idea, your first step is to find out which foods and drinks to avoid.

CAVEAT: The recommendations in this post are unsatisfying to me. They will be to you, too. What I would LIKE to tell you is where to find a comprehensive list of common foods and their glyphosate content. Such information would give you a good idea of where your exposure comes from and, thereby, the choices you can make to detoxify your diet.

Unfortunately, the federal agencies (USDA, FDA) that should be providing such information are not surveying foods for their glyphosate content. Indeed, they are actively resisting it. The issue comes down to a battle between the public interest (i.e., you) vs. Monsanto, the industrial giant that manufactures Roundup.

It is all about money.

If your government was more interested in protecting you instead of protecting Monsanto’s profits, this would be a much more satisfying post for me to write. Now you get the picture.

Meanwhile, some good information is available for your benefit. Hopefully I have put it together well enough in this article for you to take advantage of it.

The first installment in this 3-part series should give you a strong incentive (i.e., scare the crap out of you) for avoiding glyphosate. If you need a reminder, go back to this post:

Hopefully, that article makes clear how evil this herbicide is to every living thing on Earth.

Consume only products that are labeled Certified Organic.

Although this may be the “simplest” way to reduce your exposure to glyphosate, finding truly organically produced products is not all that straightforward. To wit, check out this delightfully semi-thorough explanation on Wikipedia of what organic certification means around the world.

Keep in mind that “certified organic” is the best rating available. Labels that merely say “organic” are meaningless. Furthermore, saying “all natural” is worse than meaningless.

What Can You Expect by Eating All-Organic?

Regarding glyphosate, this recent study gives you a preliminary idea of what you can expect when you eat mostly organic for just one week:

Reduction in urinary organophosphate pesticide metabolites in adults after a week-long organic diet.

Here is what this study found:

STUDY CONCLUSIONS: The consumption of an organic diet for one week significantly reduced OP [organophosphate] pesticide exposure in adults. Larger scale studies in different populations are required to confirm these findings and investigate their clinical relevance.

Oh, those scientists. What jokers.

What they meant to say was that a partially organic diet (80%) significantly reduced the levels of organophosphate pesticides in urine.

Indeed, they did not measure actual pesticide exposure. The couldn’t. By measuring only the amount of excreted organophosphate residues, they missed whatever amount that went into body tissues.

As explained in Part 1 of this series, glyphosate mimics the common amino acid, glycine. This means that glyphosate can get inserted into enzymes where glycine belongs.

Not to get too nerdy here … when that happens those enzymes can go kablooey – i.e., they don’t work. So far we know that several glyphosate-vulnerable enzymes are associated with a variety of pathologies: obesity, diabetes, Alzheimer’s disease, cancer from DNA damage, kidney failure, adrenal insufficiency, mitochondrial disease, Parkinson’s disease, and ALS.

The point is that, while eating organic for a short time is helpful, you must have a long-term strategy for avoiding exposure to glyphosate. Such a strategy means that you must know where your greatest exposure comes from so you can reduce it as much as possible.

This where your federal agencies should provide lists of foods with their glyphosate content.

Remember, Monsanto owns key federal agencies and legislators. Surveying for glyphosate content in foods is not to Monsanto’s advantage, so the company has paid their federal lackeys to put up effective roadblocks against it.

Fortunately, non-governmental groups have begun to do this work. The best report on glyphosate, including some data of its occurrence in foods, is available in this free report at Food Democracy Now!:

Glyphosate: Unsafe On Any Plate –
Food Testing Results and Scientific Reasons for Concern

Although we have nowhere near a comprehensive list of foods and their glyphosate content, we have one HUGE pattern:

Cereal grains and all processed foods made from them
consistently contain the highest levels of glyphosate.
THEY INCLUDE:
OATS, WHEAT, BARLEY, CORN, RICE, MILLET, SORGHUM, RYE, TRITICALE

Cereal grains are not good for your health, regardless of the brainwashing mantra to “eat whole grains” that permeates almost all dietary advice. They are loaded with glyphosate.

By the way, whole grains of any kind will undermine your health, regardless of whether they are “certified organic.” This is a topic for a future post. Stay tuned. Meanwhile, this is the clearest recommendation that I can give you:

AVOID CEREAL GRAINS AND ALL PROCESSED FOODS MADE FROM THEM.

One more thing … non-cereal grains (quinoa, buckwheat, amaranth, etc.) aren’t so hot, either. More on that later, too.

Let’s look at one example of how you are supposed to be fooled into believing that processed food is good for you. This example might be the top of the crap heap when it comes to glyphosate content.

Take a look at this food label: 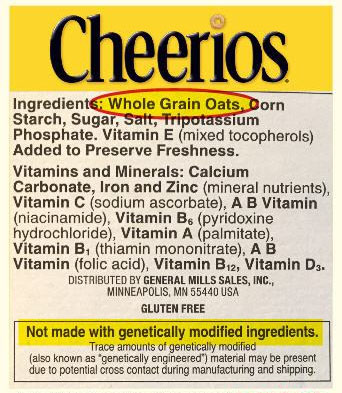 Made with whole grain oats…fine.
Not made with GMO ingredients…okay.

Now for the trick:

Due to heavy pre-harvest spraying with glyphosate as a desiccant, this product contains 1,125.3 ppb (parts per billion) of glyphosate.

That exceeds levels that cause organ damage in lab animals – and so far we are only talking about breakfast.

The FDN report cited above provides a limited list of foods and their glyphosate content. To get a better idea of how much glyphosate there might be in different food crops, the list of amounts used on different agricultural crops is a good starting point, here:

By examining that list, you can see that the Poison Top 10 consists of the following crops. The numbers in parentheses are the amounts of glyphosate used on those crops annually.

A GOOD START on reducing your exposure to glyphosate, therefore, would be to skip eating those products and any processed foods made with them, unless such products are certified organic.

You have to be aware of even more tricks of the food trade, though. For example,

The more aware you are of these kinds of tricks, the better decisions you can make on what to eat. As in all things, caveat emptor is an important mantra in modern times, probably more than ever.

How to Detoxify Glyphosate

Although avoidance is a good start, a good question is – Can you detoxify glyphosate?

The answer is, yes and no. Or, more accurately, nobody knows.

“No” and “nobody knows” refer to glyphosate that is already in your body. Once it becomes part of an enzyme, you are stuck until your normal metabolism replaces that enzyme. This is a continual process whose speed varies depending on each type of enzyme.

This goes the same for structural proteins such as collagen. Glyphosate undermines the structure of collagen, which is the main protein that holds you together – skin, bones, organs … basically, everything.

Glyphosate-containing tissues may not be replaced for days, months, or years.

This study points to possible solutions:

The study used Schleswig Holstein cows suffering from symptoms of chronic botulism. They were fed sequentially with the following supplements mixed into their feed:

*Aquahumin is the brand name of a liquid humic acid product

Now for the results:

There was a significant reduction of glyphosate in urine following supplementation with a combination of 200 g charcoal plus either 500 mL sauerkraut juice or humic acid.

What Does This Mean?

You can take charcoal with either sauerkraut juice or humic acid with every meal to significantly reduce your intake of glyphosate. Since the study involved cows – i.e., animals that are much heavier than you are – the amounts that you need are much less for you than for them.

Charcoal (i.e., “activated” charcoal), sauerkraut juice, and humic acid act by binding to glyphosate and other toxins so they can be excreted before doing any harm. Other binding agents include bentonite clay and Kombucha tea.

Such binding agents are most helpful when consumed during or immediately after meals.

Note that the cow study cited here addressed the problem of botulism in cattle. Actually, this points to an imbalance of gut microbes, which is caused by poisoning the intestinal bacteria with glyphosate.

Dysbiosis, meaning an imbalance in the gut microbiome, is a primary factor in many of our most devastating health disorders. Glyphosate kills friendly bacteria in any G.I. tract, whether in cows or in our own.

What this means is that probiotic supplements are a crucial addition to any strategy for reducing glyphosate toxicity. After all, without a healthy gut microbiome, there is no way that you can ever be healthy.

So far this post points to only a few strategies, which is all we know at this time. Others may appear as research continues. Meanwhile, the short list includes:

That’s it for now.