Barefoot running has attracted all kinds of attention and advice from the medical community. Some of it is informed and much of it is ignorant. Just take a look at the nuchal ligament to see why humans were born to run barefoot.

We could just say that humans did not evolve to run in 5-star running shoes. Indeed, we evolved to run without shoes. Barefoot running requires that each footfall is a forefoot-strike, as opposed to the predominant heel-strike style that has been around since the late 1970s – that is, since the invention of the running shoe.

As a small distraction from this post, you can see how Prof. Daniel Lieberman of the Harvard University Skeletal Biology Lab explains why we were born to run barefoot. Then take a look below the video here, at the importance of the nuchal ligament in all this.

What is the Nuchal Ligament?

You can see exactly what it is in this diagram from the classic book, Gray’s Anatomy: 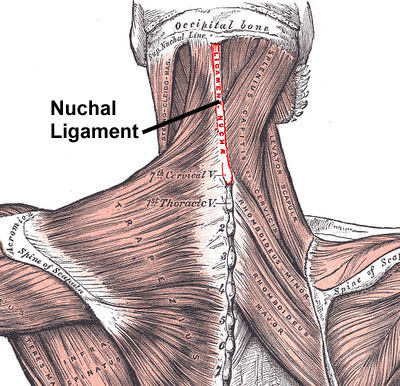 Yes, this means that humans evolved to be long-distance runners. Imagine how hard it would be to run with your head bobbing all around, like this pig on a treadmill.

Of course, the nuchal ligament isn’t our only adaptation for long-distance, barefoot running. However, we wouldn’t get very far without it.