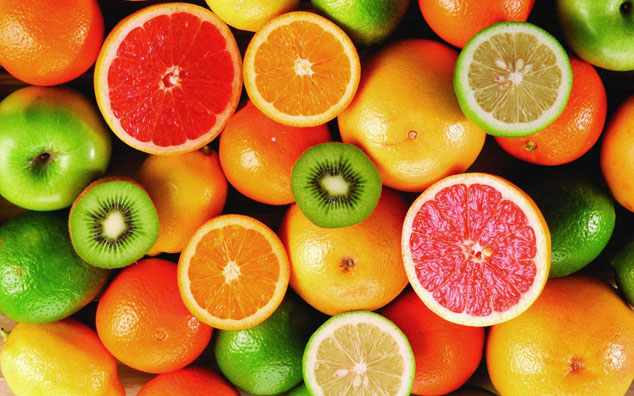 Good luck finding out how much vitamin C you really need. Scientific research on it is flat out confusing. Experts disagree. Medical people don’t know what to think. Has your doctor ever mentioned it? Probably not. It is so crucial in so many ways, though, that you really must know some truths about vitamin C so you can get the most out of it.

When Vitamin C Was New

As the now well-known story goes, Dr. Albert Szent-Györgyi was awarded a Nobel Prize in 1937, in part for his seminal work on vitamin C. It was given the chemical name, ascorbic acid, due to its anti-scorbutic activity (i.e., ‘a-scorbic acid’) – meaning its ability to prevent scurvy.

Many other features of this vitamin have been discovered since the 1930s, all of which point to its crucial role in human health.

When the concept of supplementing with vitamin C was still relatively new, Dr. Linus Pauling appeared on the health scene as the leading proponent for taking megadoses of vitamin C. He was also a pretty smart guy, having become one of the very few two-time Nobel Prize winners in history. In fact, he is the only two-time winner whose prizes were unshared.

What we have learned about vitamin C between its discovery and its Pauling-esque uses for health and disease treatment represents a decision-maze that I wouldn’t wish on anyone. The lay public has almost no chance of discovering the truths about vitamin C.

Nevertheless, a number of details can at least provide some clarity, starting with …

This interesting story comes from my colleague at Arizona State Unvversity, Dr. Carol Johnston. I used to call her “Dr. Vitamin C” because of her expertise and research experience with this vitamin. She told me that the ‘committee’ (I forget which one) on vitamins decided on the RDA between a low of 10-20 mg to a high of 200 mg. The latter number is the amount that is supposed to give you saturation in blood plasma.

As Dr. Johnston explains, the committee more or less threw a dart between the low and high amounts, which landed at 60 mg.

Voila! The RDA of vitamin C!

This is why RDAs for vitamins and minerals are routinely too low, sometimes way too low.

Let’s take a look at vitamin C in other animals to get a hint for answering this question. Yes, other animals synthesize their own vitamin C. Examples of such animals and the amounts of vitamin C they produce are summarized here: 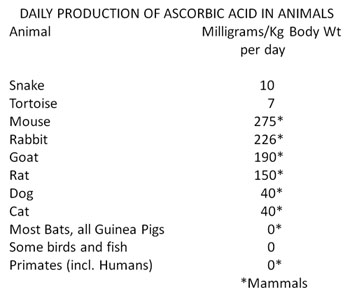 Biosynthetically, ascorbic acid is a very simple oxidation product of glucose, which we all depend on for many aspects of basic metabolism. Primates, guinea pigs, most bats, and a few fish and birds lost the enzyme for that simple step.

The range of production is still pretty broad in those animals that can make ascorbic acid. If we just look at the mammals, the low is around 40 mg per kg body weight per day (dogs and cats) and the high is around 275 (mice). Just a little math tells us that your beloved Barfy (dog), at 25 lbs (11.4 kg), is making 456 mg a day. Even a 10 lb (4.5 kg) Fifi (cat) is making 180 mg. Hmm. Our lovable little pets are making more than our own federal RDA. Interesting, huh?

The exact numbers vary with age (decreasing) and illness (increasing), but those numbers give you some ballpark figures to contemplate.

SIDENOTE: By the way, medical research that uses lab animals that make their own vitamin C, and fails to account for this variable, are worthless for extrapolating to human health. This covers just about all medical research with animals. Just a thought.

That is the low end.

If we ever approached the mouse-level needs at the high end, my personal dose would reach nearly 22,500 mg a day, or 375 times the RDA!

That is the high end.

How to these numbers stack up to advice by experts? Dr. Johnston once told me that she supplements with 1,000 mg a day. She is a vegetarian, so she probably gets plenty of vitamin C from plant sources in her diet. It is hard to say how much she or anyone gets from food, though, since vitamin C in foods is unstable and diminishes quickly over a short time.

In contrast, Dr. Pauling personally took somewhere around the 20,000 mg range. This puts it closer to the high-end producing goats and mice, among the mammals who make their own.

Let’s say that the RDA is pitifully low. If we hadn’t descended from primates that lost the gene for the enzyme that makes ascorbic acid from glucose, we would be making somewhere between the low and high end producers: i.e., for my body size it would be 3,300 to 22,500 mg per day.

Now we are getting somewhere. Maybe some research will narrow that range down a bit.

First…What Does Vitamin C Do?

The Linus Pauling Institute at Oregon State University has an extensive number of articles on vitamin C. The general overview, highly detailed, is here: Vitamin C. The summary of functions described there are as follows:

Vitamin C is a potent reducing agent, meaning that it readily donates electrons to recipient molecules. Related to this oxidation-reduction (redox) potential, two major functions of vitamin C are as an antioxidant and as an enzyme cofactor.

Vitamin C is the primary water-soluble, non-enzymatic antioxidant in plasma and tissues. Even in small amounts vitamin C can protect indispensable molecules in the body, such as proteins, lipids (fats), carbohydrates, and nucleic acids (DNA and RNA), from damage by free radicals and reactive oxygen species (ROS) that are generated during normal metabolism, by active immune cells, and through exposure to toxins and pollutants (e.g., certain chemotherapy drugs and cigarette smoke). Vitamin C also participates in redox recycling of other important antioxidants; for example, vitamin C is known to regenerate vitamin E from its oxidized form.

Vitamin C’s role as a cofactor is also related to its redox potential. By maintaining enzyme-bound metals in their reduced forms, vitamin C assists mixed-function oxidases in the synthesis of several critical biomolecules. Symptoms of vitamin C deficiency, such as poor wound healing and lethargy, result from impairment of these enzymatic reactions and insufficient collagen, carnitine, and catecholamine synthesis (see Deficiency). Research also suggests that vitamin C is involved in the metabolism of cholesterol to bile acids, which may have implications for blood cholesterol levels and the incidence of gallstones.

Finally, vitamin C increases the bioavailability of iron from foods by enhancing intestinal absorption of non-heme iron (1) (see the article on Iron).

(BTW: You can ignore the recommended dosages at that site, since they do not represent the views of the late Dr. Pauling himself.)

Fine … it is a great antioxidant. Add to that its crucial role in collagen synthesis. How important is that? Check this out from collagen at Wikipedia:

As the main component of connective tissue (including tendons, ligaments, and skin), it is the most abundant protein in mammals, making up from 25% to 35% of the whole-body protein content. It is also abundant in corneas, cartilage, bones, blood vessels, the gut, intervertebral discs and the dentin in teeth. In muscle tissue, it serves as a major component of the endomysium. Collagen constitutes one to two percent of muscle tissue, and accounts for 6% of the weight of strong, tendinous muscles.

Pretty dang important stuff. And it depends on vitamin C.

If you want to stay glued together, you have to have enough vitamin C to make it happen. Will 60 mg a day do it? Pshaw!

Part of the confusion about how much to take stems from a bald-faced disinformation campaign on the part of mainstream medicine. If you are interested in some background on that issue, take a look at Dr. Pauling’s own easy-to-read essay on his experiences (My Love Affair With Vitamin C) and an article on the medical corruption that plagued him (Case Study of Scientific Corruption).

Dosages were for treating cancer with 10,000 mg a day. The results were phenomenal.

Going further, Norman Cousins, in his book, Anatomy of An Illness, used 25,000 mg every few hours, intravenously, to help cure an insidious disease.

Now we know the range of dosages for disease treatment. When looking for specific recommendations, the general and most common one is to take vitamin C to bowel tolerance. Although that might seem pretty gross, it merely means the amount that doesn’t cause diarrhea. Everyone will be different. Disease states will command more, since the body becomes like a sponge for it when illness strikes.

One of the best sources for recommended dosages in relation to bowel tolerance is at the Vitamin C Foundation, here: Vitamin C, Titrating to Tolerance. It is a great article whose overall recommendations are summarized in this table:

That is, of course, not a comprehensive list. If you are super serious about learning more details about vitamin C and what it can do for your health, you can now read the seminal book on the topic, The Healing Factor: Vitamin C Against Disease by Dr. Irwin Stone, at no charge. It is a fascination book that I highly recommend.

What Should You Do Now?

More than likely, you should get more vitamin C into your body every day. The amount you need will vary depending on your health status. Regardless, you probably will not be able to get a sufficient amount from food.

Supplementing is fairly easy if you do what I do, which gets me about 10,000 mg a day.

Since I don’t have a colon (long story), vitamin C always rushed through me like a Formula I racer. Very painfully so. I couldn’t get more than 200 mg at a time without flames spewing out the other end. It is difficult to reach bowel tolerance without a (large) bowel.

A few weeks ago I discovered the phenomenal properties of baking soda for ramping up my internal antioxidant power (see Health and Fitness Miracle in Your Cupboard). Then I came across a book by Capt. T.C. Randall (Forbidden Healing) that described how to take vitamin C by mixing it with baking soda. The recipe that I found to work for me is simple:

Here is what I noticed right away: a glass of that mix doesn’t hurt! I drink the whole liter over the day, in 3-4 doses. It did run through me pretty fast the first time I took it. Now it is slowing down.

The most important benefit I’ve noticed already is a clear rebalancing of my intestinal microbiome. My gut bacteria have shifted away from too much Clostridium difficile (‘C-diff’). C-diff blooms are my nemesis. Actually they are problematic for lots of people. Antibiotics make it worse (except for Flagyl, which was designed to treat C-diff problems).

I am thrilled. I can now take all the vitamin C that I want. I have already seen positive results.

Oh, by the way, whatever amount of vitamin C you decide to take, make sure it is as a bulk powder in water. Supplement pills aren’t generally absorbed as well. Besides bulk powder is a LOT cheaper.