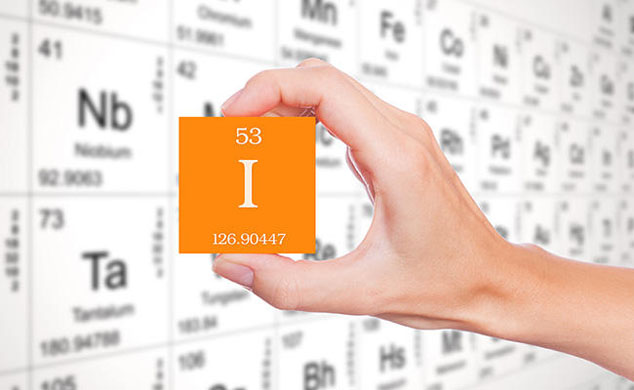 The most misunderstood and under-appreciated mineral that your health depends on is iodine. Unfortunately, almost everyone has iodine deficiency. Without enough of it, you have absolutely no chance of being as healthy as you should be. None.

Let’s start out by getting right to the point … what can go wrong if you don’t have enough iodine? Here is the short list:

The broad importance of iodine in all of these health issues underscores the role of this mineral in every cell in your body. Although citing statistics might impress you, the main point is that all of the above health problems have reached epidemic levels in modern times and that iodine deficiency is a leading culprit for them.

If you are iodine deficient (almost a given), you either already suffer from one or more of these unnecessary health disasters or you are on the way to them.

Always be very wary of the health advice your government gives you. Iodine is a good example. The federal daily recommendation for iodine intake is 150 mcg (micrograms), which is 0.15 mg (milligrams). This is a pathetically low dosage that was designated in 1924 to prevent goiter (enlarged thyroid) in the ‘Goiter Belt’ (upper Midwest U.S. and Great Lakes region typified by low iodine content of soils).

To compound this idiotic advice, your lovable feds backed a program to provide iodine in iodized salt. Unfortunately, the bioavailability of iodine from iodized salt is about 10 percent of its content.

Finally, to top off this whole Looney Toons picture, modern medicine jumped onto the evils of dietary salt. Estimates now are that at least half of American households do not use iodized salt.

Ah … a perfect storm of stupidity. (No word yet on whether this has anything to do with lower IQs in bureaucrats caused by iodine deficiency during fetal development.)

This is a very important topic for two reasons: 1) Breast cancer is the leading cancer for public awareness; and, 2) It is preventable and treatable with iodine.

SIDENOTE: It is a shame that neither modern medicine nor the general public comprehends the failure of genetic determinism … i.e., simplistically, meaning that you are your DNA. Regarding breast cancer, this translates to the belief that BRCA1, the so-called breast cancer gene recently made famous by Angelina Jolie, determines your odds for developing breast cancer.

Geneticists have know for many years that genes work in an environmental context that regulates their activity. The new term for this context is epigenesis. This means that ‘bad’ genes do not cause cancer, a bad cellular environment does.

The most important component of a bad cellular environment leading to breast cancer is iodine deficiency. After the thyroid, breast tissue is the biggest sponge for iodine in the body. Breast tissue simply cannot be healthy without enough of it.

Ms. Jolie’s medical team has let her down. She, in turn, has spread her misinformed views by writing in the New York Times about her decision to undergo preventive breast and ovary removal surgeries.

The relationship between breast cancer (and thyroid cancer) and iodine has been documented in research by Dr. B.A. Eskin over the past 40 years. The bottom line is that the presence of sufficient amounts of iodine prevents breast cancer. The ‘wrong’ form of the BRCA1 gene has very little to do with it.

Imagine how different Angelina Jolie’s storyline would be if her doctors had told her that.

What about breast cancer treatment?

Keep in mind that iodine is an inexpensive mineral that is available as a low priced supplement and as a natural ingredient in certain foods. This means that it is not patentable as a drug and will therefore never be the subject of a large clinical trial for treating breast cancer, or for anything else for that matter.

Information about using iodine for treating breast cancer, therefore, must come from individual case histories available from doctors who have used this treatment.

One such doctor is Dr. David Brownstein, who is the reigning expert on the use of iodine in clinical applications. The following are summaries of three of his patients who eliminated their breast cancer with the use of iodine:

Dr. Brownstein’s work is nothing short of phenomenal. He has put together the highlights of what he has discovered about iodine for a wide variety of health issues in a book, Iodine: Why You Need It, Why You Can’t Live Without It.

BOTH FORMS ARE IMPORTANT FOR FULL HEALTH FUNCTIONS.

The form that you get from foods and from most supplements is exclusively the ionic form. This falls short of what your body needs.

Very few supplements provide elemental and ionic iodine together. However, this is exactly the type of supplement that Dr. Brownstein used for treating his patients with breast cancer.

The product that I use, which does provide both forms of iodine, is called Iodoral. My daily dose is 25 mg, which includes 15 mg of the ionic (iodide) form and 10 mg of the elemental form.

WHY DO I TAKE IODINE?

Men, you’re going to love this.

Statistics are just as depressing for prostate health as they are for breast health. Men just don’t have the National Football League publicizing the ‘Prostate Cancer Awareness Month’. In fact, I had to Google it to find out that we even had one. It turns out that President Obama declared the first one as September, 2014.

Woo-hoo! We’ve got our own month now!

We don’t yet have any equivalent stories to Angelina Jolie’s. Mostly celebrity reports have been about a few non-survivors (e.g., Bill Bixby, Frank Zappa, Dennis Hopper) and the tough guys who not only survived prostate cancer but also the burn-poison-butcher treatments provided by modern medicine (e.g., Robert De Niro, Arnold Palmer, and Joe Torre).

Prostate cancer has some similarities with breast cancer, so we can expect similar population patterns between the two.

This and similar comparisons are the best kind of evidence we have so far. It is indirect correlation, which is fine as far as it goes. However, the application of iodine as a treatment for prostate cancer is not widely publicized.

Nevertheless, one of the NHANES reports (Nutr Cancer. 2007;58(1):28-34.) found a clear link between thyroid disease and an increased prostate cancer risk. This underscores the observation that thyroid disorders (and now prostate cancer) can be traced to iodine deficiency.

What about it’s direct application to the scrotum, which is closest to the prostate? This is a very interesting strategy that is now under individual experimentation by many men who report their experiences on various forums on the internet.

Overall, the reported results are positive, sometimes even amazing. They include everything from improving frequency of nighttime urination to reducing erectile dysfunction. Some caution is warranted, though, since iodine can cause temporary skin inflammation when it is overdone. Not a pleasant thought.

Just use the All-Powerful Google to find what other men are doing with Lugol’s for more details on how to use it and what to expect.

The main enemies of iodine function are other minerals that are classified as halogens on the periodic table. These are fluorine, bromine, and chlorine. These other halogens tend to sit on iodine receptors, thereby blocking the iodine itself and undermining its health benefits.

The main culprits for exposure to these halogens are fluoridated water, brominated vegetable oils (in many baked goods and some soft drinks), and chloride in salt or chlorinated water. The simplest fixes for these exposures is avoiding fluoridated water and chlorinated water and processed foods and beverages that are made with BVO. Of course, avoiding processed foods in general is a good idea. Now you know one more reason for why that is a good idea.

As for avoiding salt, the best strategy is not to reduce it in your diet. Instead it is best to replace refined salt with sea salt, and plenty of it. The multiple trace minerals in sea salt balance out how you use different minerals. One consequence is reducing the impact of chlorine.

I’ve selected just two areas where iodine is crucial for health – breast and prostate. These are not the only health issues that can be addressed by iodine supplementation and therapy. The list of iodine deficiency disorders above could be topic material for many more articles.

Let’s just agree for the moment, though, that you are most likely to be iodine deficient and could use a serious iodine boost in your diet (mostly from marine animals and algae [kelp, etc.]) and in your supplement program (ideally from Iodoral).

One myth that you will run into involves iodine toxicity. Doctors still think that you can easily overdo it and will give you advice based on this ignorance. The question is, how much can you take?

The highest standard doses are given for treating toxicity from radioactive iodine, as from nuclear accidents (iodine-131 is a breakdown product from the decay of uranium-235). Enough potassium iodide must be taken to displace the radioactive mineral. The dosage may be as much as 130 mg per day until enough of the I-131 decays (half-life of 8 days).

This is why potassium iodide became so popular right after the Fukushima disaster in Japan. See details about potassium iodide for this purpose at the U.S. Centers for Disease Control and Prevention.

The point is, standard supplement dosages of 12.5 to 50 mg are just fine.