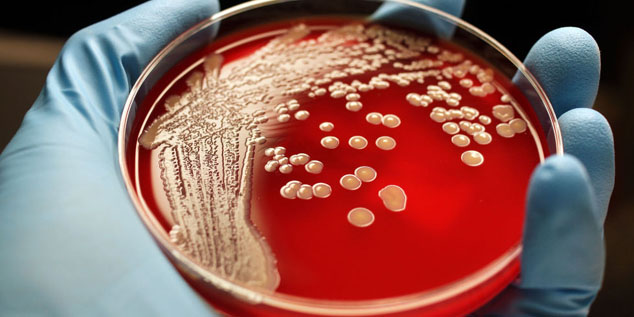 One of the super-bugs, the antibiotic-resistant bacteria that have arisen through the overuse of antibiotics, is on the loose. This one is called MRSA, which stands for “methicillin-resistant Staphylococcus aureus.” MRSA staph infections have become a nightmare.

MRSA first arose in hospitals in the 1960s. MRSA like this is now in the news because of its escape from hospitals and other healthcare institutions, into the community at large. Life-ruining and even fatal infections are increasing among otherwise healthy people, from high school and professional athletes, to housewives, children, and employees. The first time I heard of this super-bug was in an article in Sports Illustrated about the spread of infections among young athletes. The saddening stories in this article included one about a high school football player who contracted a seemingly minor skin infection and died within 7 days from the spread of MRSA.

Numerous articles are appearing in the news about this deadly bacterium. One of the best and most comprehensive descriptions that I have found of the medical details and symptoms of MRSA staph infections is by Dr. Mark Christensen: MRSA Staph Infections: Coming to a Workplace Near You. What is missing from this and virtually all other articles on MRSA is sound advice on natural solutions to this growing problem. I offer some below. What brings me to writing this article, however, is that modern medicine is launching an all-out blitz against MRSA, which is surely going to make matters worse.

An article in our local newspaper on March 4, 2009, trumpets a brand new study in the search for a solution to MRSA. This study will cost $9 million in grants from government agencies, will take 5 years, and will involve about 3,000 patients. The core of this study will be to resurrect older antibiotics in hopes that something will work.

Keep in mind that methicillin resistance arose because of the over-use of methicillin. The current treatment of choice for MRSA is an antibiotic by the name of vanomycin. Hospital treatment entails using high levels of vanomycin intravenously for several days. It should be no surprise at all that, as of 1996, a new form of staph infection has started to appear in hospitals, first in Japan and now in the U.S. It is called VRSA.

Staphylococcus aureus is a wiley pathogen. Pathogenic bacteria typically are. Very few life-killing toxins will keep them down for long. It is only a matter of time before the latest mega-project to eradicate staph infections will enable the appearance of newer, even more resistant and increasingly deadly forms of this bacterium. This is stupid. Indeed, it fits the classic definition of insanity: Doing the same thing over and over, expecting a different outcome.

Antibiotic Herbs to the Rescue

All plants produce antibiotics. They have to, because they are sitting ducks for infection without them. Modern medicine has failed to capitalize on this cornucopia because they are not sources of patentable drugs. Nevertheless, almost every herb that has ever been tested for antibiotic activity shows some. Certain herbs are more powerful than others.

The neat thing about natural antibiotics is that bacteria do not develop resistance to them in a mixture of at least three substances. Whole herb extracts, of course, typically contain dozens of substances that have some level of antibiotic activity. This is a general principle that applies not only to microbes but also to insect pests and to malignant tumors.

If medical researchers spent a fraction of the time and money on evaluating antibiotic herbal preparations for treating MRSA staph infections, we would have a much better chance of controlling this growing problem. In fact, the top 5 antibiotic herbs, based on activity and availability, are already well known in recent botanical research, so the stage is set for finding multiple good, cost-effective solutions. I’ve provided more details about these herbs below. Keep in mind that this is a short list taken from hundreds of herbs that are known to have antibiotic activity.

The creosote bush (also known as chaparral tea) produces dozens of flavonoid-type natural products and secretes them into a resin on the surfaces of the leaves and stems. Antimicrobial activities are the foundation for numerous folk medical uses by Native Americans, including treatments for flu, cold sores, skin infections, sore throat, colds, and gonorrhea. Modern research shows the resin to be active against herpes and other viruses (including HIV), as well as against bacteria and fungi. If you live in any of the deserts of the southwest U.S. or adjacent Mexico, you can collect your own material from this plant.