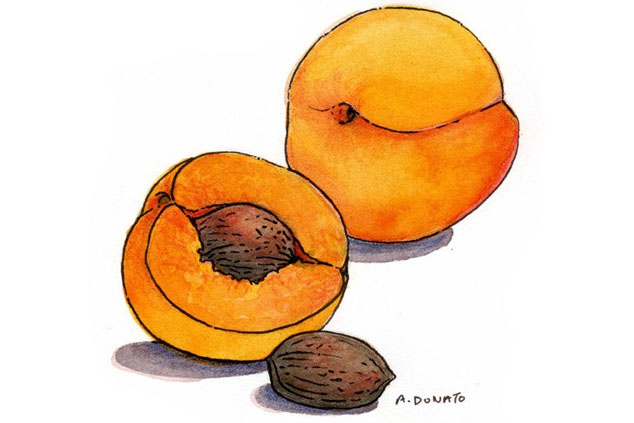 When it comes to natural cancer cures, plant biochemists have pulled their hair out over the widespread misuse of the term laetrile. (Okay, that’s my story for my own male pattern baldness, and I am sticking with it!) The main issue is the mix up between a natural product and what we chemists call a semisynthetic one.

Apricot pits and many other kinds of seeds contain a natural product that is called amygdalin, which is often used synonymously with laetrile. They are not the same.

Amygdalin consists of the following parts: a benzene ring, a nitrile (cyano) group, and two molecules of glucose together in a side chain. Although these parts can be put together in several ways, only one particular combination is called amygdalin. Chemists are very picky that way.

Laetrile consists of the following parts: a benzene ring, a nitrile (cyano) group, and one molecule of glucuronic acid as a side group. The question about what this molecule is can be resolved by simply knowing the origin of the word laetrile. It comes from the detailed name of the molecule, which is laevomandelonitrile.

Why Is This Important?

The body of research on laetrile as a natural cancer cure is littered with confusion about which molecule was used in any one patient group or lab animal experiment. To make matters worse, early researchers campaigned to get amygdalin or laetrile – it is not clear which – approved as a vitamin, B-17.

Vitamin B-17 is now available commercially, although it is almost certainly amygdalin most of the time. Company representatives do not generally know enough about the subject to provide clarity on their own vitamin B-17 products.

Do Laetrile and Amygdalin Have the Same Anticancer Activity?

That is the key question. It can only be answered theoretically, based on the supposed mechanism of action of laetrile. It goes like this:

Enzymes in tumors cleave the glucuronic acid group off of the intact laetrile molecule. The remaining parts then disintegrate spontaneously into two pieces: a molecule of cyanide and a molecule of benzaldehyde. Supposedly, once the cyanide molecule is released inside the tumor, it goes about killing the cancer cells.

Amygdalin breaks apart the same way, after enzymes in the tumor cleave off the glucose side chain. According to this behavior, amygdalin should have the same mechanism of action against cancer as laetrile does.

Enough Chemistry – What is the Bottom Line for Treating Cancer?

Since laetrile is chemically modified from amyglalin, it may occur as a 50-50 mixture of active and inactive forms. For this reason, a stable concentration of amygdalin should provide the best chance for full anticancer activity.

The key word here is stable. If you have a product that is supposed to be vitamin B-17, or amygdalin, or laetrile, it may be giving off an odor of cyanide (like the odor of bitter almonds or of ground up apple seeds). The stronger the odor, the more of the active ingredient it has lost.

Are Laetrile/Amygdalin Valuable a Cancer Treatment?

More than 80 years of research, from several labs and clinics around the world, shows strong support for a positive answer to this question. Another indication is that this treatment, especially in combination with other treatments, became so good that it was made illegal and chased out of the U.S.

The closest laetrile/amygdalin-based treatment clinics have been in Mexican border towns, especially in Tijuana. Unfortunately, legal problems arising because of certain sections of the North American Free Trade Agreement (NAFTA) have led to closures of some of these cancer clinics.

Natural cancer cures are still as good as they always have been. It is just that getting access to them has become more of a challenge in recent years.

The best book that I have found on alternative cancer treatment is the following (click on image for details):