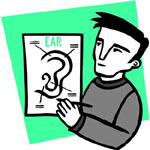 Tinnitus treatment depends entirely on the type of tinnitus. Vascular tinnitus is treatable and reversible. Here is how I decided what I have, what to do about it, and the results so far.

Recently I reported on my newly developing tinnitus and the research that I found out about how to treat it. This is the post that offers the list of treatments that I found and what you can expect from them: Ringing In Ears Goes Away.

It is important to be clear about what type of tinnitus you have. Wikipedia offers descriptions for two main types of tinnitus: 1) Objective or vascular tinnitus (see below); and, 2) subjective tinnitus (noise-induced damage, also associated with hearing loss).

This what I am interested in and here is why…

The reason that I decided that my symptoms indicate vascular tinnitus, and not noise-induced damage, are several:

The most likely source of noise-induced damage for me would have been shooting guns, which I have done for many years. However, damage would have been mainly to one ear, showing up primarily as hearing loss. This is what other hunting buddies of mine have experienced.

My general vascular flow problem is what I call the ‘long-distance flight syndrome’ or something like that. It is well-known in travelers who sit nearly immobile in an airplane seat for a few hours at a time. This is what happens to me when I sit for long periods at my desk.

CONCLUSION: I have vascular tinnitus, not noise-related damage. This is good news, since the latter damage is permanent – i.e., irreversible.

This just means that I can experiment with any and all of the tinnitus treatment options that I summarized in the previous post that I linked to above. All of these options are easily accessible and cost-effective.

My favorite one is Ginkgo biloba, only because I have some research experience with this herb and I have done extensive literature review of the 1,000-plus research articles on it. Contrary to popular belief and marketing hype, it is not well-supported as a memory enhancer. However, it is effective against two conditions: 1) vascular tinnitus (aha!); and, 2) intermittent claudication (aha again!). The latter is pain caused by a vascular problem in the lower legs. Hmm. Sound familiar? The flavonoids and terpenoids in Ginkgo are well-known to help with strengthening capillary and vein walls, thereby aiding vascular flow.

I have been supplementing with 20 mg of melatonin nightly for several years, so I have that one covered. I now take a time-released form of magnesium, 500 mg per day in 4 separate doses (to avoid the laxative effect), with double the amount of calcium to balance the two together. I have upped my B-vitamins and at least once a day take B-12, 5000 mcg sublingually (which is more than 80,000 percent of the RDA, meaning that the government-defined recommendation is pathetically inadequate). I’ve just restarted taking 50 mg of zinc per day, which I had stopped a while ago when I forgot to reorder it.

The Ginkgo biloba supplement that I take is an extract that is standardized to 24 percent ginkgoflavones (flavonoids) and 6 percent ginkgolides (terpenes), which is the typical requirement in clinical research. No other kinds of Ginkgo supplements measure up, so don’t bother with them if you are going to take this herb. Oh, and be sure to take 240 mg per day.

Anything that causes vascular constriction is more than likely to be a negative impact on vascular tinnitus. How much, nobody knows. The two biggies are nicotine and caffeine. I have cut down my coffee intake to one cup, down from six or more, per day. Decaffeinated coffee has to satisfy my habit after that.

Nicotine has never been part of my lifestyle, so I have no worries there. Nicotine, by the way, is the most powerful vasoconstrictor you can imagine. I saw video once that showed the veins in a patient’s hand becoming noticeably constricted only 10 minutes after taking a puff on a cigarette.

It will take a few weeks to know whether my multi-pronged approach is helping. At some point, if I am not seeing the results that I want, I will add hydergine and vinpocetine to my tinnitus treatment program. These are the final two herbal ingredients in the list that I posted at Ringing In Ears Goes Away.

If it comes to that, I will also up my B-complex and B-12 intake by converting to injectable forms, since that would be even more effective than the oral B-complex and the sublingual B-12 that I am taking now.

I will post my progress as I see new results over the next few weeks and months, so stay tuned here (or be sure to subscribe to my newsletter by requesting my free supplements report here: Complete Nutrition).

Although I am not personally concerned with this type of tinnitus, let me call to your attention the comment on treating this type with melatonin, as described in my previous post.