The ‘real’ Paleo Diet is certainly much better than the Standard American Diet. The modern Paleo Diet, however, is pretty far from ancestral eating.

Although the so-called ‘Paleo Diet’ has become very well-known, it has many different variants. The main premise, as outlined by its main proponent, Prof. Loren Cordain, is as follows:

The Paleo Diet is based upon everyday, modern foods that mimic the food groups of our pre-agricultural, hunter-gatherer ancestors.

You might think that all versions of the Paleo Diet would follow that premise as much as possible. However, not all of them do. Conflicting notions may arise from the way that Dr. Cordain summarizes the seven fundamental characteristics of this diet, as follows:

In graphic form, the food pyramid based on this diet looks like this: 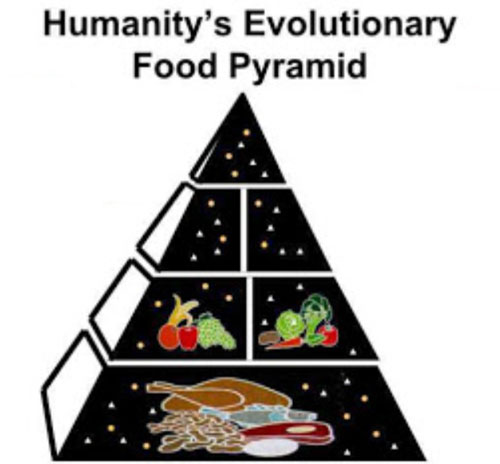 The Paleo Diet website is a good place to start thinking about ancestral living. For simplicity, let’s take a look at the seven main components of this lifestyle one at a time.

By the way, true ancestral living is absolutely NOT possible in the 21st century anywhere on Earth. I’ll explain why that’s the case and what do do about it toward the end of this post.

This premise is fine superficially. However, the SOURCES of protein are critical for simulating ancestral living.

This is where collagen in paleolithic bones gives us isotope measurements (technically referred to as δ13C for carbon and δ15N for nitrogen) that say a lot about the ancestral sources of that protein.

Carbon isotopes vary based on their source … i.e., marine vs. land animals. In contrast, nitrogen isotopes reflects how high up on the food chain the protein source was.

Based on δ13C data, the earliest humans got most of their protein from land animals. As time passed the populations of large game thinned due to heavy hunting by both humans and Neanderthals. This led to a switch of protein sources to more marine animals.

A bigger surprise to many Paleo folks is where on the food chain our ancestors lived. This is where the following two graphs from Prof. Michael P. Richards provide some excellent clues. The graphs are almost self-explanatory. I will comment on them below. 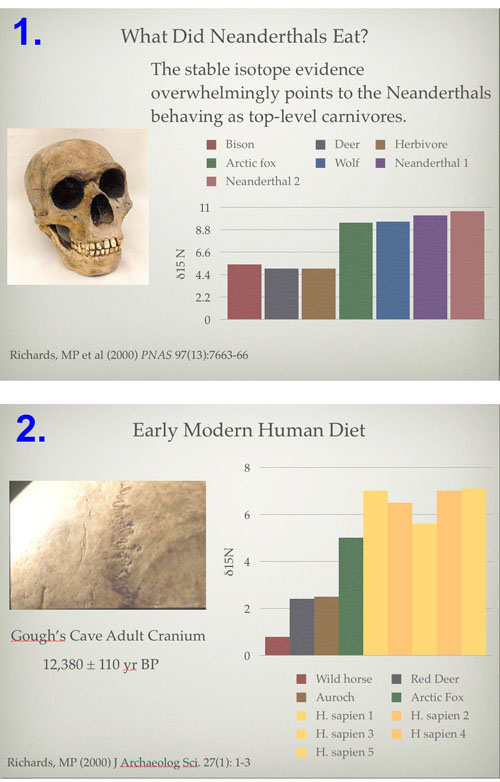 These data point to early humans and Neanderthals as super-carnivores, meaning high up on the food chain. Graph 1 shows Neanderthals eating like other carnivores (fox, wolf). Graph 2 says the same thing for several samples of Homo sapiens.

Two critical points about dietary animal protein in the modernized Paleo diet are either missing or severely underemphasized:

First: Seafood. The pyramid above does include a fish, tucked away behind a steak. The fish, however, should be in front, along with lots of other sources of seafood.

Second: The whole animal. The emphasis on muscle meat (e.g., steak) constitutes a huge hole in the modernized Paleo diet. Just think about this one for a moment. Imagine a caveman digging into a fresh kill, cutting out the leg, rib, breast and back muscles … then tossing the rest into the trash!

It turns out that old-time surveys by early anthropologists described ‘modern’ Paleo people as eating the whole animal. Indeed, the muscle meat was considered the LEAST desirable part of the animal.

The image below is more accurate about what kinds of protein sources would more closely simulate an ancestral diet. It does not show all possible sources, although it gives you a better idea of what the base of our food pyramid should be when following a real Paleo diet.

I added the partial cover of Fergus Henderson’s book, The Whole Beast: Nose to Tail Eating, just to show where you can find recipes for EVERY part of an animal. The challenge is finding those parts. Most supermarkets offer only the most limited and boring selection, primarily centered around muscle meats.

To get a variety of meats, you must branch out to ethnic markets such as Hispanic or Oriental, to get organ meats and a wider selection of seafoods than Safeway will ever provide.

A huge benefit of expanding your animal protein sources comes from the fats they contain.

Actually, the sources and types of animal fats are even more important than the animal proteins.

We’ll get to that topic momentarily. To keep things in order, though, the next point to address is…

At PaleoDiet.com this premise is expanded as follows:

Non-starchy fresh fruits and vegetables represent the main carbohydrate source and will provide for 35-45 % of your daily calories. Almost all of these foods have low glycemic indices that are slowly digested and absorbed, and won’t spike blood sugar levels.

This premise is depicted in the Paleo food pyramid above as:

THESE FRUITS AND VEGETABLES DID NOT EXIST IN PALEOLITHIC TIMES!!!!

This is a big topic that is addressed by Jo Robinson in her book, Eating on the Wild Side. One of her goals is to advise us how to get old-time nutrition from modern nutritionally depleted fruits and vegetables. Her homepage says:

The nutritional losses did not begin 50 or 100 years ago, she has learned, but thousands of years earlier when we first abandoned our native diet of wild plants and game and began to domesticate animals and grow food in the first primitive gardens. Unwittingly, the choices we made about how to feed our livestock and what to plant in our gardens reduced the amount of vitamins, minerals, protein, fiber, healthy fats, and antioxidants in the human diet, which compromised our ability to fight disease and enjoy optimum health.

This just means that any ‘modern’ Paleo diet advice that incorporates today’s fruits and vegetables is WAY off base.

COMMENT ON CALORIES: Talking about calories is a simple-minded and ineffective way to say anything about the metabolic value of foods. Assigning a caloric distribution of food types is, therefore, absolutely useless for describing what a Paleo diet, or any other diet, should be.

If we are considering truly valuable advice about eating any kind of starch or sugar, regardless of the source, it would be: Eat very, very little. Vary your intake seasonally – less in winter and more in summer – based on what grows in your geographical area.

The best part about this advice is avoiding cereal grains. That is an obvious one.

Comments about getting enough fiber from fruits and vegetables, however, fall along the same lines as number 2 above. Be very, very careful about carbs here.

Whew! That is a mouthful!

The best part of the description at PaleoDiet.com is:

Cut the trans fats and the Omega-6 polyunsaturated fats in your diet and increase the healthful monounsaturated and Omega-3 fats that were the mainstays of Stone Age diets.

That is a great start. Guess where Stone Age diets got their monounsaturated fat?

Yup…tongue, brains, lungs, kidneys, livers, pancreas, eyes (eyes!), heart, etc., etc. This list includes some of fattiest meats you can get. If considering fowl, then this includes skin. If considering seafood, then oily fish are the best.

Brains are unavailable these days because of worries about mad cow disease, etc. However, this organ provided Paleo people with one of THE most important dietary fats of all time: DHA (docosahexaenoic acid).

It is a main component of mammalian brains, including yours. It is crucial for optimal brain function.

The good news is that oily fish also provide DHA. In fact, an entire industry is built up around fish oil supplements that promote the importance of DHA. However, there is nothing better as a source of DHA than food, not supplements. See what I mean in this earlier post explaining why: Fish Oils – Industry BS Just Plain Fishy.

The dietary fat profile of modern times is derived typically from vegetable oils having a high proportion of omega-6 fatty acids. Cutting back on those and instead using coconut oil should help tremendously with your dietary fat profile. (See Coconut Oil – A Health Marvel And Much More.)

Still, none of this advice is truly Paleo, since neither modern seed oils nor coconut oil were available to most Paleo cultures.

Virtually all of the commentary on these aspects of the modernized Paleo diet is based on current concepts in nutrition. Rather than pick each one apart one at a time, I will instead point out the biggest and most crucial missing component in nearly all versions of the Paleo diet.

Paleo enthusiasts basically miss the boat on this one. This is why I posted an article dedicated just to this mineral: Most Important Mineral For Optimal Health. You are undoubtedly iodine deficient. It is a crucial mineral. If you are not eating massive amounts of seafood, including sea vegetables, then you must consider supplementing with iodine.

As I said earlier, ancestral living is not possible in modern times. Why?

We are surrounded by non-native electromagnetic fields (nnEMFs), including man-made radio-frequencies and dirty electricity.

If you use or are exposed to any kind of modern technology, you are absorbing nnEMFs. Living systems, however, are entrained to native resonances (i.e., Schumann resonances) and frequencies of light and near light (UV, infrared). Furthermore, all animals evolved circadian rhythms – i.e., 24-hour cycles.

nnEMFs are a worldwide phenomenon. They’re everywhere on Earth. The best you can do for simulating an ancestral lifestyle is minimize your exposure to them, choose behaviors that fit with your body’s circadian rhythms, and learn how to use light for optimal health.

This is a very complicated topic that is currently addressed by Dr. Jack Kruse in many, many blog posts on his massive website. At the moment I have studied his views for nearly six months and I still have a lot to learn.

One critical point has become very clear, though. Diet alone is not the answer to optimal health. Indeed, even though eating a real Paleo Diet (or as close as you can get to it) is a great improvement over the Standard American Diet, it is far less important than addressing other factors of our biology.

In due time I will summarize the top action steps for optimal health that I have discovered from Dr. Kruse. You will find them on your own if you dig into his site.