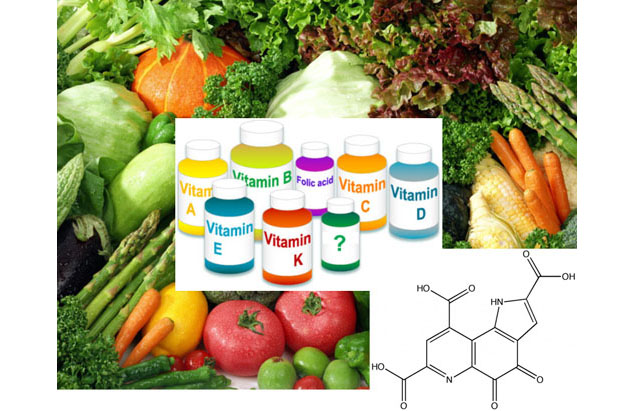 If you haven’t heard of PQQ yet, then take a look at why some scientists want this substance to be classified as a vitamin. It is a remarkable modern discovery that can perform miracles.

Well…almost. The substance in question is called pyrroloquinoline quinone (PQQ). It was introduced as a new vitamin in 2003 in this article in Nature:

Nicotinamides and flavins are essential cofactors in enzyme-catalysed reduction–oxidation (redox) reactions and are classified as vitamins because they must be supplied in the diet. Another redox cofactor, pyrroloquinoline quinone (PQQ), was first discovered in bacteria and is also likely to be important in mammals, but the biochemical pathways in which it participates are unknown. Here we identify a PQQ-dependent dehydrogenase enzyme that is crucial for the degradation of the amino acid lysine in mice. PQQ is acting as a mammalian redox cofactor in this reaction, and therefore qualifies as a newcomer to the B group of vitamins. [Bolding mine]

Unfortunately, calling PQQ a vitamin in the first place apparently overstepped the bounds of the ‘vitamin rules’. Controversy ensued.

Fast forward to the present. The current general scientific agreement is that, although PQQ is not really a vitamin, it is a crucial and essential nutrient in our diet.

PQQ has become a nutrient superstar.

Why is PQQ So Important?

Although PQQ has been known only since about 1980, nearly 800 research articles have already been published on it.

What we know about it at this time entails a broad set of functions that underscore good health.

The main list of PQQ’s health benefits so far includes the following:

If this list seems too sciencey, then just consider this: A main focus of current research is on the ability of PQQ to protect memory and cognition due to aging.

Parkinson’s and Alzheimer’s are the two biggies of interest here.

And Maybe the Most Important Benefit of All…

Your health and longevity absolutely depend on how well your mitochondria are working. (See: Live Long And Prosper With Healthy Mitochondria.)

Getting PQQ in Your Diet

The good news is that PQQ has been found in all plant foods examined so far, plus a smattering of other sources. The following summary gives you a good idea of how much you can get from certain foods (pay close attention to how much PQQ in each): 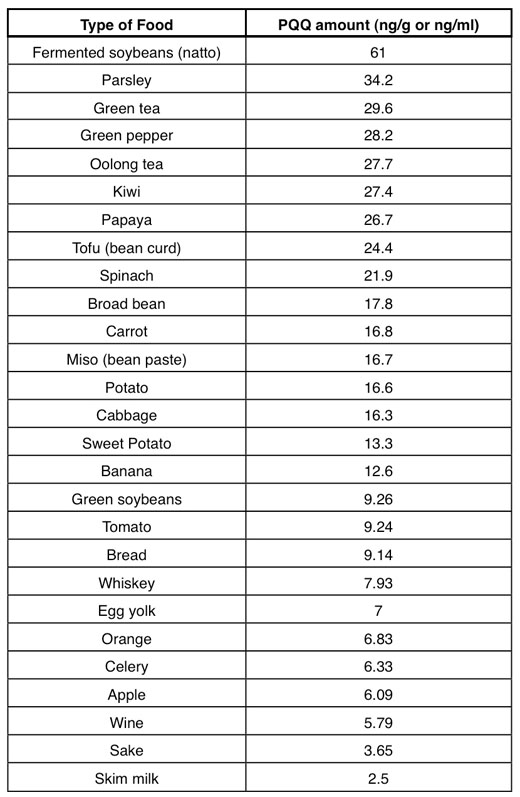 Note that the amounts of available PQQ are presented in ng (nanograms) per gram or per milliliter. A nanogram is a billionth of a gram.

Even thinking about how tiny these amounts are can be a challenge. Look at it this way: compared with amounts used in recent experiments, the level of PQQ from food sources is way too small.

Although we don’t yet know what the optimal dosages of PQQ should be, scientists generally agree that it is in the neighborhood of milligrams per day – i.e., in the range of a million-fold higher that what food sources can provide.

Specifically, the targeted amount for daily intake to reach optimal benefits is 10-20 mg of PQQ. That is why you will find supplements that provide one or the other of those amounts per serving.

Bonus for the Aging Brain

The effectiveness of PQQ on its own seems to be age-related. Animal studies show a synergistic effect between PQQ and CoQ-10. A recent human study discovered that people aged 40-70 did, indeed, improve in tests of higher cognition on 20 mg of PQQ per day. Moreover, those who also took 300 mg of CoQ-10 improved even more dramatically.

On the other hand, a small study of 10 subjects, aged 21-34, showed a significant decrease in inflammatory indicators after taking PQQ alone.

This leads to the current recommendation that most people under 50 may not need the simultaneous intake of PQQ and CoQ-10, while those over 50 do.

If you are taking cholesterol-lowering statins, you absolutely must supplement with CoQ-10 regardless of your age. Statins interfere with your natural ability to synthesize this crucial metabolite.

Supplements of CoQ-10 come in two forms: reduced (ubiquinol) and oxidized (ubiquinone). The reduced form is about 8-fold better absorbed than the oxidized form. This means that a target dose of 100 mg per day of ubiquinol is plenty.

On a personal note, based on what I have discovered about PQQ and CoQ-10 for people in my age bracket (late 60s), I take 20 mg of PQQ and 100 mg of ubiquinol daily.

Nearly every supplement manufacturer offers both of these products in those amounts, so they aren’t difficult to find.

However, if you are looking online for them, consider getting them from my own nutrition site. The two best products, in my opinion, are:

Ubiquinol by Protocol for Life

Be sure to use code ‘dnc42’ when you sign in so you can get access to our supplements.

Expect the Most Good Here…

They are therefore the tissues where we can expect the greatest benefits from supplementary PQQ and ubiquinol.

All the best for mitochondrial health,