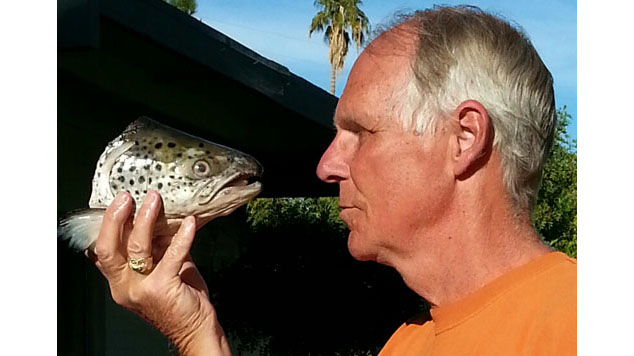 Why would anyone want to eat a fish head? If you aren’t too culturally isolated, you might be surprised by how good it can be. Besides, fish heads are a phenomenal health food, especially for brain health. Gee, who wouldn’t want that? My first experience cooking it was quite an adventure. Here are a few of my personal discoveries that you might benefit from when you make your first foray into this wonderful delicacy.

Two main reasons are behind my choice for this particular dish, as follows:

I’ve been sticking pretty close to a Paleo diet for quite a while now. Unfortunately, the protein and fat sources in most recommended food lists are mind-numbingly dull. The main meat sources are muscle meats, most commonly from beef cows. Even bison, goat, duck, and other such less common meat sources still share one main flaw – they are all muscle meats.

The reason this is important is because muscle meats were undoubtedly the last choice in the list of animal parts that Paleolithic humans ate. Regardless of what the Paleo folks tell you, Paleolithic people did not thrive on grilled steaks. Far from it.

One type of evidence is based on isotope ratios in Paleolithic human bones. This research came out in a fascinating article in the Proceedings of the National Academy of Sciences USA in 2009, titled, Isotopic evidence for the diets of European Neanderthals and early modern humans. You can download the full article at no charge via that link. It is a bit technical, so I’ve also provided a simplified explanation on this topic in an earlier blog post, here: Will the Real Paleo Diet Please Stand Up?

The bottom line is that pre-agricultural humans ate pretty high up on the food web – i.e. we ate mostly carnivores. To do so the main food sources had to be predominantly marine animals. Prehistoric herbivores, equivalent to modern cows, were mostly not on the menu. Of course, grain-fed herbivores were never on the menu, since back then there were no grains for them to eat in the first place.

The second type of evidence comes from anthropologists who examined how aborigines ate as recently as the 1940s. Their diet represents the closest approximation of how Paleolithic people consumed an animal. In short, their first choices were tongue, brains, lungs, kidneys, livers, pancreas, eyes (eyes!), heart, etc., etc. This list includes some of fattiest meats you can get. If considering fowl, then this includes skin. If considering seafood, then oily fishes are the best. Muscle meat (steaks, chops, roast, etc.) were the last choice, often tossed aside to members of the tribe with the lowest status.

In modern times, WE are eating mostly on the low end of the totem pole, folks!

So began my search for dietary variety that would simulate what humans are adapted to eat. Okay, that and the thrill of an epicurean adventure.

DHA (docosahexaenoic acid) is the single most important dietary fatty acid that we can consume.

Eating high on the food chain, mostly seafood, provided DHA to our ancestors. That is what we evolved to eat to get this crucial fatty acid in our diet. That is what we should be eating more of in modern times. Eating fish once a week is a common piece of advice from medical folks. I contend that eating it every day is much more advisable.

If I am anticipating your thoughts, especially those of you who don’t like fish – yes, fish oil supplements are available. Unfortunately, the extraction and chemical processing of oils from fish rearranges DHA from its natural form. The result is a much less effective source of DHA than from whole food fish oils (i.e., fish). The story behind that comment is explained in my earlier blog post here: Fish Oils – Industry BS Just Plain Fishy. Highly recommended reading.

Based on that knowledge, here is the kicker that led me to fish heads: the greatest concentration of DHA in fish is in eyes and brains. (It’s the same for humans, too – which gives you an idea of where in our own bodies it is especially crucial to have plenty of DHA.)

Okay, that sets the stage for why fish head soup. Now for my experience.

Most fish head soup recipes on the internet are for salmon soup. It turns out that this is a simple choice, since salmon heads are large, cheap, and easy to find. I found Canadian salmon heads at our local Mekong Market in Mesa, AZ, priced at 99 cents a pound. They were huge!

Most of the recipes that I found called for a variety of vegetables and spices. I rejected those recipes that suggested adding potatoes or noodles – no carbs for me (Paleo, remember?). What I settled on were diced yellow onions, minced garlic, cilantro, and celery. Most recipes utterly fail to properly describe how these veggies should be prepared. Any chef worth is or her salt will tell you to sautee the veggies in butter very slowly for 30-60 minutes (longer is preferable). Lots of butter.

To make this mixture into soup, I added a quart of organic chicken broth (no MSG!) and sufficient water to submerge two large salmon heads. The key at this point is to simmer (not boil) the soup for only about 20-30 minutes. That is plenty of time for cooking fish heads to doneness.

Then the Fun Began

You may have to consume the fish head by yourself, in case others in your household are grossed out by seeing it on your plate. (I’m speaking from personal experience here.) I used a plate for the head and a bowl for the liquid/veggie part of the soup.

My main mistake was that the soup had very little flavor – just low-taste veggies. The next time I make this dish I will spice it up with Cajun spices, or more garlic, or salt and pepper – anything to give it more flavor.

The salmon head itself, however, truly measured up to what I was looking for. The fattiest and best tasting parts were, indeed, the eyes. Also the cheeks. I’m not sure what the brain was like, since I couldn’t tell when I was eating it. The skin was also fatty, and there was a modicum of what we think of as ‘salmon’ – aka, muscle meat.

Overall, I’d say that my experience with salmon soup was interesting, although not interesting enough to do it again real soon. It is much easier to prepare tuna or salmon steaks or to get a healthy dose of DHA from canned sardines, tuna, salmon, or herring, as long as they are not packed in vegetable oil. (Sardines are always packed in vegetable oil, so I have these the least, even when they are supposedly in ‘extra virgin olive oil’. I just drain them and blot with a paper towel to remove as much of the vegetable oil as possible.)

SIDENOTE: My main objection to canned foods, including fish, is that all cans are plastic-lined. This is a source for BPA, which should be kept to a minimum in anyone’s diet. (More on this here: Watch For BPA In Canned Food. I therefore do not eat canned fish more than about 3 times a week.

Whether you are having fish head soup (salmon soup), cooked oily fish, or even mackerel head smoothies, the main point of importance is to consume DHA every day. Whole fish is the best source. Supplements are okay, just not as effective as DHA from whole food.